In Berlin
the barrel organ
is also called “Leierkasten”!

Organ grinder, barrel organ or hurdy-gurdy lady - here is the place to be!

From Berlin-Steglitz to Chicago with a barrel organ straight from her desk in the district's council of Starlit to the United States of America: Manuela Hopf is an ambassador of a very special kind.

Steglitz. She works in the construction administration in Berlin Starlit, where telephone calls, paper chases and piles of documents are waiting for her every day. Boring? Maybe - at least when you don't have anything else to do in your life. Manuela Hopf, though, leads two lives. She is an ardent hand organ grinder: "The perfect pastime. If playing the barrel organ hadn't existed yet, it would have to be invented." She has just come back from Chicago where she represented Germany at a fair - and of course her barrel organ was there, too.

It all began eleven years ago when a friend of Manuela's persuaded her to come along to the Berlin barrel organ festival. It did not take long for the skilled technical draughtswoman to know: "I need a barrel organ!" Even the costs couldn't deter her: a new barrel organ can rarely be found for under DM 10.000. She opted for a used one and things developed very quickly. There are three barrel organs now, and her husband Ingo is also infected with her passion for barrel organs. The two quite frequently appear as "Berolinchen" (little Berolina, the personification of Berlin) and "Bärchen" (little bear), both together and separately.

Manuela Hopf doesn't take to the street to collect money for a good cause, she is hired and the demand is huge. She performed at Bellevue castle when Germany's federal president, Roman Herzog, was discharged from his office. She has played the barrel organ for foreign guests in the Hotel Adlon, and performed at receptions, in old people's homes, children's birthday parties, and at family gatherings. "It's a great job. You meet jolly people there.", the forty-three-year's old says. Often, the audience is forced to join in, no matter whether they are German or not. Manuela Hopf hands out texts and music and all sing along when she plays "Bolle reiste jüngst zu Pfingsten", or "Sabinchen war ein Frauenzimmer", or "Fritze Bollmann". If you want, you can even grind the organ yourself, and then you will receive a little award in the form of a red heart clothing pin, which can be worn with pride. Even elegant businessmen with white collars and ties will pin one to their jacket, Manuela Hopf tells smilingly. And children, too, like the hands-on experience, even if their muscles quickly become sore. 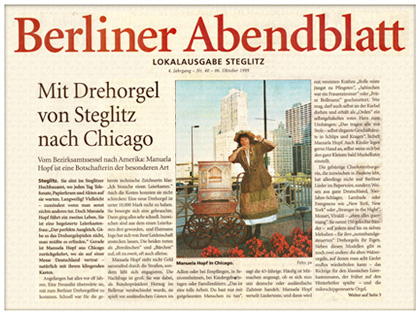 Born in Berlin's district of Charlottenburg, but now resident in Berlin-Pankow, Manuela Hopf's repertoire contains not only pieces that are typical for Berlin, but also songs from all over Germany. Together with songs from the Fifties and other favourite music such as Lambada and evergreens such as "New York", and "Strangers in the Night", along with music by Mozart or Vivaldi, there is "Everything you can find in the Garden of Music", as she puts it. Manuela Hopf owns 150 rolls of music. These are bands of paper with holes punched in them which are drawn over the pins on the roll of the organ, and then make the music. Each of those rolls contains seven songs and is made especially for a grinder organ such as she owns. There are two other types of organs besides these which work with similar rolls. One is the old barrel organ where eight songs are encoded directly to the barrel and the songs are repeated again and again - just the right thing for the classical barrel organ grinder who moves from house to house and earns his money by delighting the inhabitants. The second kind of organ is the one which works with a microchip. "This model can even be played by an elephant with its trunk." Manuela Hopf says. This would be totally different from playing the hand-cranked organ which you can play both quickly and slowly. "But the most wonderful thing is that every one can produce music quite easily on the hand organ."

When Manuela Hopf performs, she not only grinds the organ but also tells stories, and recites poems and verses between her songs. She naturally wears historic costumes while performing with the barrel organ. Manuela Hopf does not get her costumes from a costume hire, but rather has them custom-made in Bangkok. The second pastime for the worker from the district council is travelling. "The farther the better." So, it is nothing for her to turn up in Thailand, or travel to Hawaii to get married - as happened twelve years ago.

So everything fit together nicely when she travelled to Chicago recently with her barrel organ. "It was the first time for me to go foreign with the instrument, "says Manuela Hopf. She made contact with a New York agency which arranges business trips to Germany, she then landed in Chicago, a city with 3 million inhabitants on the shores of Lake Michigan. There, she played in a fair and presented her musical impression of Germany, with songs from Berlin, the Rhine area and the Rhineland; and with songs from the North Sea and the Baltic Sea shores, all of which she had packed into her luggage. She had really been impressed by the city: "The city centre is unbelievably clean, the people like to chat and are really friendly, and I couldn't have imagined a more beautiful place." On top of that, the weather was gorgeous for the end of September and she could even pursue her third favourite hobby, photography. Especially the many artificial colourful cows which were her favourite motif. There are hundreds of cows all over the city which was once famous for it's many enormous slaughterhouses. Each of the plastic cows is different, each is in itself an artful masterpiece. 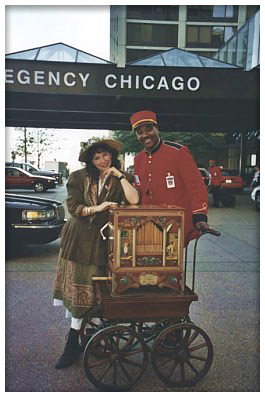 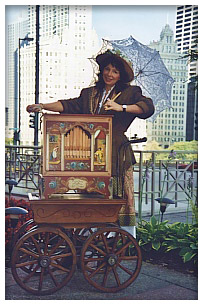 Manuela Hopf will be faithful to her main pastime, playing the barrel organ. Thus she will also be present at the Foreign Ministers' meeting on the tenth of October. It's not the money she is after, but rather the feedback of the audience, the confirmation of a loved tradition and the fun she always emphasises. She even tries to enthuse others about her hobby: A few years ago, she was the inspiration for a book about barrel organs. She has organised an exhibition at the Charlottenburg history museum and conducted tours for blind people through it: "The barrel organ is a fantastic instrument for handicapped people."

Those who want to contact Manuela Hopf: Telephone 030 477 12 92.
The article was taken from the Berliner Abendblatt and was translated by Sabrina Willekens (and Pamela Niehoff).

If you have any questions, please contact us by telephone or »» e-mail